I have another child...

...I know exactly where he came from,
ME!
We are SO much alike.
Except, I don't have that fabulous sense of humor.

Anyway, this child of mine? 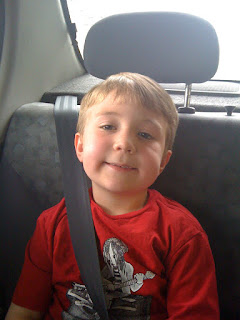 Let me tell you a little bit about this incredible boy!

*For some reason, some time during the past year, his favorite color is no longer Orange (I won't lie, it makes me a little sad), but BLUE, dark BLUE or bright BLUE.

*He's very thoughtful when it comes to his family. He tries SO hard to save his last three pieces of candy for Aaron, Piper and me. It usually ends up with just half a piece for the three of us to share. (I'm telling you, he is SO mine, but I wouldn't even try to share, I'd just eat the candy)

*He is SO stubborn. I love this about him, but I hate it too, because I know where he got it from and I know what can happen when you are stubborn.

*His focus amazes me. Once he starts something, he has to finish it. He gets SO frustrated when he is in the middle of something and we have to go somewhere or do something. This is especially true with legos and his inventions.

*He is an amazing inventor! Give him a bunch of crap and he will be occupied for hours inventing. When I say crap, I mean tape, especially tape and anything he can tape up.

*He may be stubborn and focused, but he has a very laid back personality, which I love about him, he doesn't take anything too seriously...that is until he steps on stage.

*His ability on stage is something all actors strive for, however it comes naturally for Teague, while most actors train for years.

*He is such a good kid. He is so respectful to grown-ups. And apparently is is extremely well behaved when I'm not around, he seems to understand completely that there is a time and a place for everything.

*He is hysterical. If you know him at all, you know this.


For his birthday he wanted a late night. He had seven friends come over in their jammies for pizza, cake and ice cream. We played games and watched a movie. It was Iron Man themed. And, I'll tell you what. Boys are VERY different than girls (we did a late night for Piper's 7th birthday). It was SO fun, but I was glad when it was over. 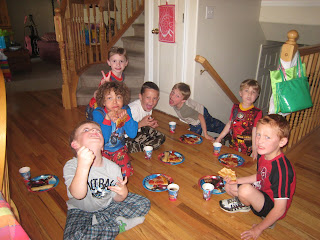 Teague has some really great friends. 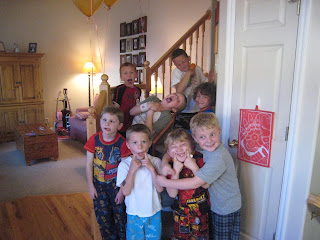 Teague brings such joy to our family. Not a day goes by with him around that you don't smile and laugh, even it's just smiling because he is so stinking cute.

I LOVE YOU TEAGUE!